ALGORITHMS FOR FRAGMENTATION OF n-ALKANES AND n-PERFLUOROALKANES

Abstract: The fragmentation algorithm [M]+.n-alkanes C1-C60 and n-perfluoroalkanes C1-C20 was established by analysis of spectra from NIST libraries. The alkyl ions of [CnH2n + 1]+ n-alkanes were obtained as a result of two series that arise during primary separations from [M]+.methyl and ethyl radicals that open up a methylene chain, and subsequent emissions of neutral ethylene molecules. This fragmentation algorithm is confirmed by examples of mass spectra emulation of deuteroalkanes. A series of olefinic [CnH2n]+ and alkenyl [CnH2n-1]+ n-alkane ions are formed from [M-H]+ and [M -2H]+ at detachment of methyl and ethyl radicals and subsequent emissions of ethylene molecules.
In spectra of n-perfluoroalkanes, a series of perfluoroalkyl ions [CnF2n +1]+ occurs as a result of initial detachment of fluorine atom and subsequent emissions of difluorocarbene. The less intense series of perfluoroalkenyl ions [CnF2n-2]+ peaks are the result of three successive detachments of fluorine atom M-57 and subsequent emissions of difluorocarbene: M-107, M-157, M-207 ... The primary alkenyl fragmentation process of n-perfluoroalkanes is different from primary process of alkyl fragmentation with two additional detachments of fluorine atom, which require additional time.
By comparing the spectra of n-octane and n-perfluorooctane recorded via the magnetic mass spectrometer and the ion trap mass spectrometer (Polaris Q), it was confirmed that the ratio of peak intensities of competing alkyl and alkenyl fragmentation depends on ion residence time in the separation zone.

Over the past 50-60 years the mysterious and not decrypted algorithms of fragmentation due to ionisation of n-alkanes and n-perfluoroalkanes by electrons have moved from the terra incognita category to the similis est category (it’s not fashionable). To restore the lost status of this problem, a real literature review and analysis of mass spectra of n-alkanes and n-perfluoroalkanes presented in the NIST libraries were performed.

A theoretical analysis of molecular ions decay for normal hydrocarbons [4] postulated that the resulting fragment ions are a result of successive decay events in which each ion decays to produce an ion with the number of hydrocarbon atoms with at least half of the original number of atoms.

In a number of papers, the fragmentation of n-alkanes was studied using the technique of metastable peaks, notably along with primary separation of ·C2H5, ·C3H7 and ·C4H9 radicals; the emission of molecules: H2, CH4, C2H2, C2H4, C3H6 was also considered [5-7]. The base publication, which made it possible to determine the isotopic composition of formed ions and to be able to evaluate the results of emulation of deuteroalkanes spectra along one or another fragmentation path, was the paper [3]. However, none of n-alkane decay algorithms was recognized as adequate when conformance inspection between existing experimental isotopic distribution of formed ions in the spectra of labeled alkanes [3] and the distributions obtained as a result of proposed fragmentation paths [8-11,12,13].

On page 47 of review [14], summarizing the previous publications, their authors conclude: “It can be assumed with sufficient reliability that decay of normal paraffin hydrocarbon molecules during electron impact is characterized by an initial non-selective detachment of C-C bonds with subsequent stagewise decomposition of initially formed products”. Based on this conclusion, presented in Fig. 1, the mass spectra of n-alkane C60 and n-perfluoroalkane C20, illustrating methylene and difluoromethylene “glide paths”, are “mirages” that hide a complex real mechanism of decay. 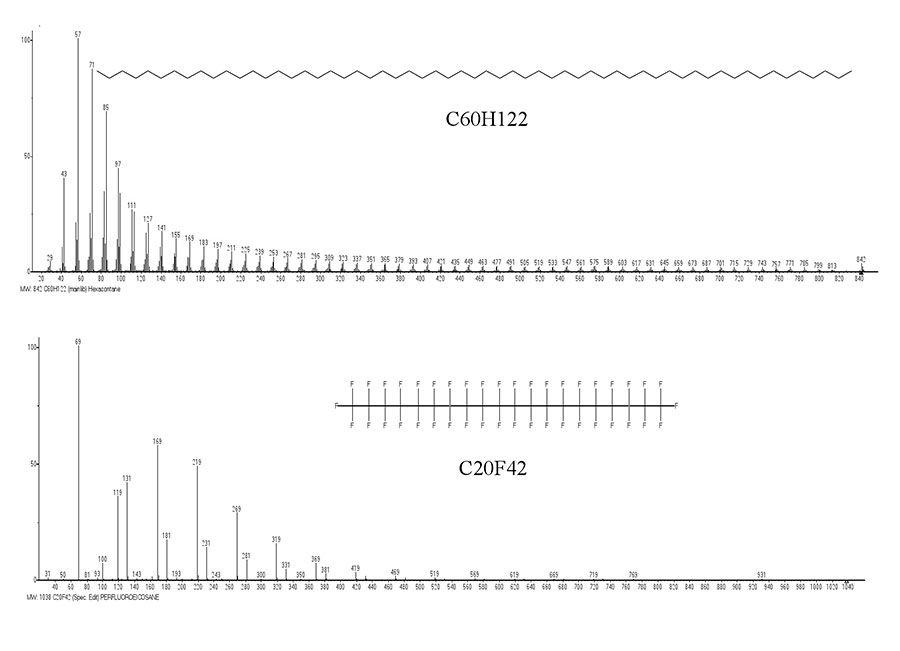 However, such harmonious, regular, smoothly increasing spectra permits to suppose that it are based on a simple and universal fragmentation algorithm. Given the “methylene” nature of alkanes and perfluoroalkanes fragmentation, the first question has always been the possibility of methylene (as well as difluorocarbene) separation from ions formed after chain opening, when the H, F atoms, methyl or trifluoromethyl radicals are detached from the molecular cation radicals.

In monograph [15], the author concludes: «There are very weak peaks of metastable ions in mass spectra of alkanes, which correspond to process of CH2 formation. However, the contribution of such processes to fragmentation is negligible, given the high enthalpy of formation of EO CH2 equal 90 kcal/mol. The detachment of CH2 is observed only for very simple molecules with limited potential fragmentation.

A much more intensive release of difluorocarbene occurs, which is 43 kcal/mol more stable than methylene (Atlas, 1970; Budzikiewicz, 1979)».

On page 146 of review [14] the authors report: «In spectra of perfluoroparaffins, between two fairly intense peaks the peaks of metastable transitions are observed, which corresponds to detachment of the CF2 group».

The relative probability of fragmentation paths for alkanes and perfluoroalkanes: with the detachment of H and F atoms, CH2 and CF2 carbenes, alkyl and perfluoroalkyl radicals, must be estimated taking into account both the standard enthalpies of formation of detached fragments (see Table 1) [15,16], and the magnitude of their masses. When choosing a participant in fragmentation processes from applicants with admissible education enthalpies, a priority remains for a fragment with a minimum mass value.

A most energy-consumption way of alkanes and perfluoroalkanes fragmentation (except for CH2 detachment) (see Table 1.) is the emission of H and F atoms with minimal masses, with detachment of which fragmentation of both lower and higher homologs begins.

The detachment of ·H (52.1 kcal/mol), methyl .CH3 (34.8 kcal/mol) and ethyl radicals .C2H5 (26.5 kcal/mol) are three main primary processes of decay the M·+ homologs of C4-C60 n-alkanes, which open up the methylene chain, which is further fragmented by successive detachments of ethylene molecules (12.5 kcal/mol). The presented n-alkane fragmentation algorithm was successfully confirmed by emulation of spectra of deuterosubstituted analogues [3].

In spectra of perfluoroalkanes, in addition to process of atom detachment of·F atoms (19 kcal/mol), the second really occurring process should be considered (for all possible participants in fragmentation CF2 (-43.2), ·CF3 (-115), C2F4 (-152) , ·C2F5 (-217)) only as sequential detachment of difluorocarbene with minimum weight. This perfluoroalkane fragmentation algorithm is described in detail in corresponding section of this publication.

Despite the energy utility, the synchronous detachments of neutral CH4 and CF4 molecules are unlikely in comparison with actually occurring sequential detachments of ·H and ·CH3, as well as the detachments of 2·F and CF2.

In compared with increase in peak intensities of alkyl and alkenyl ions occurring with an increase in molecular weight of homologs, the peak increase of olefin ions [CnH2n]+ is minimal. Perhaps this is due to the fact that olefin ions are an “intermediate link” between alkyl and more stable alkenyl ions. 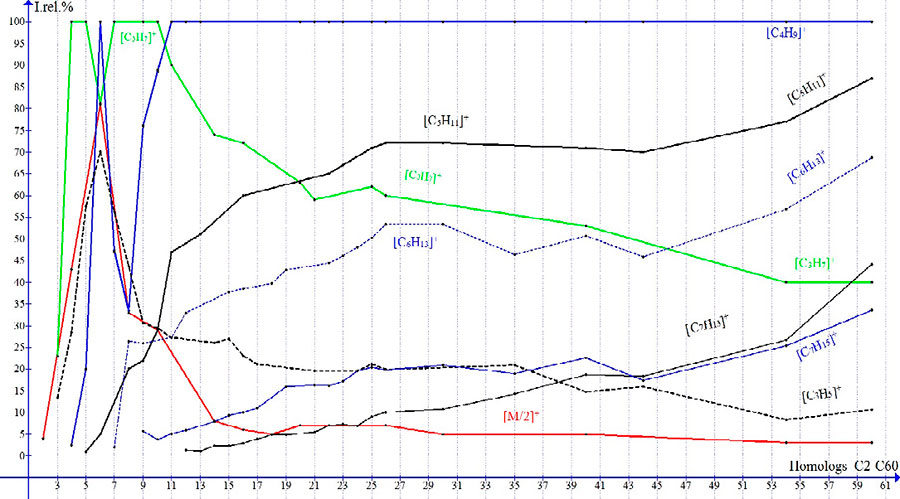 Figure 2. Dependences of Irel (in %) on its molecular weight for ion peaks of n-alkanes homologues.

In contrast to spectra of C1-C8, in which there are two zones: the zone of increase in peak intensities and the zone of its decline; the spectra of C12-C60 have the plateau, after which there is a sharp increase in intensity of fragment peaks. With increase in molecular weight of homologs, the plateau of spectrum increases. If this plateau in spectrum includes a large number of weak peaks (the intensities of which gradually increase as their mass decreases), then the sharp fragmentation section will contain no more than 4 peaks with a sharply increasing intensity. A sharp increase in intensity of alkyl peaks begins when the ratio of formed ions masses to the mass of detached ethylene will reach 71: 28 = 2,5: 1 and 85: 28 = 3,0: 1, respectively.

In spectra of C9-C60, the almost unchanged position of transition the plateau zone to the sharp fragmentation zone corresponds to ions +[C7H15] m/z 99 and +[C8H17] m/z 113, whose masses are approximately twice as large the masses of basic ions m/z 43 and m/z 57.

The comparison of alkyl peaks in mass spectrum of n-octane with the mass numbers of its spectrum emulated by algorithm of parallel primary detachments of ·CH3 and ·C2H5, with subsequent sequential emissions of ethylene (see Table 2) confirms its complete coincidence.

In spectra of n-alkanes homologues with an even number of carbon atoms, there is M/2 ion, when both the detached radical and the observed formed ion have the same mass. The presented fragmentation algorithm leads to formation of alkyl ions, including M/2 ion. However, in homologues C6 and C8 direct decomposition of M/2 is also possible (with detachment of radicals larger than ethyl (Fig. 2). In spectra of C4, C6 and C8, the peak intensities +[M/2] are 43%, 81%, and 33%, respectively.

With further increase in molecular mass of a homologue, with increase in masses of formed ion and radical, the M/2 peak moves from the zone of increase in spectrum intensities to the plateau zone with minimal intensities. The maximum intensity of 81%, close to the intensity for base ion, peak M/2 has only in spectrum of C6. Since the excess energy M+· is divided between the ion and the radical in half, the peak of M/2 ion cannot become the base one. For this reason, it is precisely in C6 spectrum that a certain “dumping” of base ion +[C3H7]” 43: 43 = 1: 1 occurs (Fig. 2). Instead of ion +[C3H7], the base ion in C6 temporarily becomes the ion [C4H9]+ 57: 29 = 1.96: 1, which is formed upon detachment of ethyl radical, which has a mass less than the mass of ion. In C6, the formation of M/2 ion 81% is accompanied by its strong hydrogen fragmentation with detachment of H atom and formation of olefin ion with m/z 42 41%, as well as the emission of second hydrogen atoms with formation of allylic ion [C3H5]+ 70% (Fig. 2 )